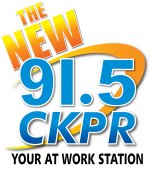 CKPR-FM is a radio station in Thunder Bay, Ontario, Canada. The station broadcasts an Adult Contemporary format, with a mix of hit music, at 91.5 FM.

In 1948, the station's owners launched an FM simulcast on CKPR-FM. In 1962, the owners also acquired CFPA-TV, the city's CBC Television affiliate, which then adopted the CKPR callsign as well.

Currently, the station, still owned and operated by the Dougall family under the name Dougall Media, plays a mix of hits spanning from the 1970s up to today, and has a strong focus on news and local coverage of Thunder Bay and surrounding area.