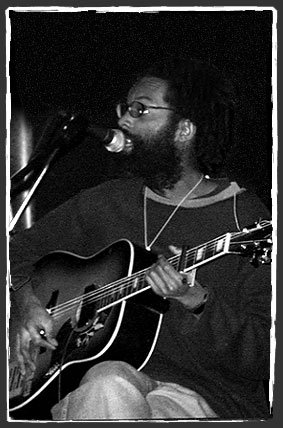 Most known for his appearences at The Apollo John Morris also can be seen busking, Offending and preaching on the streets of downtown PA. He has in his life been an athlete, poet/songwriter, and has also got off a charge in court by saying only "But I'm Not Guilty" for all the remands with no legal representation. In 2003 Paul Cherwonick started to record John on his own and with the band the Moonpeople. All the tracks were recorded live to quarter inch analog tapes and vintage tape machines were used. The recording was done at Paul's jamshack retro studio. The aim was to record like they did in the 50's and 60's to have songs that sounded like they were from that era. The experiment worked. After hearing hours and hours of tape Paul selected and mastered the best takes. The album eventually featured the best of the the jamshack tapes and also the Moonpeoples best concert recordings from the Apollo bar & grill. It was eventually titled "THOUGHTS" and released on the Hometown Records.