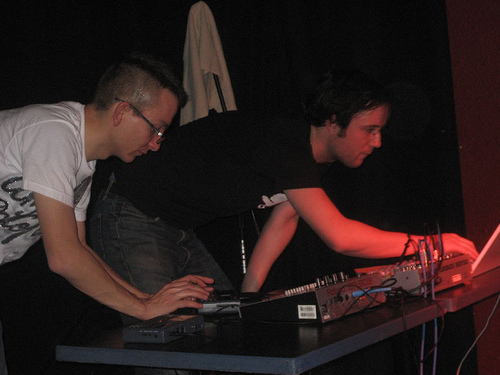 Justin Armstrong and Dave Shaw at the xmas 2006 reunion show

As Hello Pu$$y, Cellophane, and Beardo And The Bang Harders:

If I'm not mistaken, this band was comprised of Justin Armstrong and Dave Shaw, who after changing their name were known as the Ninja Hawkz.

They changed names often, and one of their one-show names was Goats Eat Tin Cans.

If this is true, then I saw Drop Science open for Plumtree at the Fourth Dimension when it was on Mckenzie Street and they had this song where Justin played an out of tune guitar and screamed about ants for a long time. I like ants too.

That's correct. In fact, that was the first show the duo played. Although I believe it was under the "Plastic Exploding Chamber Emsemble" guise. Other names the project took, with and without other members, included "Wizard and the Guy" "Hello Pussy" "Orange Weapon" "The Ninja Hawk Sound System"