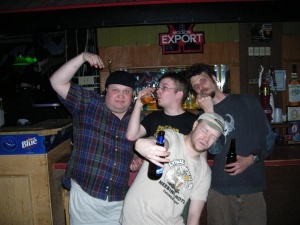 Temporary members at one time or another: 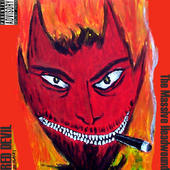 Described as the "Dayglo Abortions of Northwestern Ontario." Heavy, fast, take no prisoners raw punk/metal & rock and roll of the highest caliber. If you like your music fast, dirty, heavy and intense, we're the band for you. 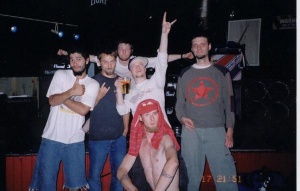 Red Devil's Scott, Webster, and Destructo with members of Tugnut after show

Recorded a few demos and live recordings. Recorded a legit debut release in 2006 (The Massive Headwound) with new recordings of old crowd favourites and a few brand new rockers. Jam-packed with Red Devil live classics that had never been captured on cd. Released entirely for free by MP3. No known CD copies released. Check out our myspace page myspace.com/reddevilrules for a few tracks. Red Devil will be doing a bunch of stuff in 2009 so watch out for it.

Thanks for visiting our bandwiki.