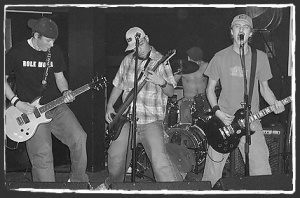 During the summer of 2001, a few friends know as Andrew and Ryan got together to form a different type of band, not the normal Punk rock that you hear all over Thunder Bay. Second In Line was to be different and it would soon turn out that way. After a few practices and a couple songs without a drummer or second guitarist, the hopes were looking bad. Andrew then recalled Taylor Smith of Kob Nobler (Andrews old band). He called Taylor and asked if he was interested in a new energetic band. Taylor imediately said yes, and after just one practice Second In Line was on its way to success and stardom. Now with Second In Line being a three piece band and just not getting that full sound, the boys decided to get a second guitarist. Andrew was in a band before with a fella names Steve MacKenzie, this ringed a bell in old Wangers head. Wangs, called up Stevo and bam! Second In Line was complete. As time passed the guys in the band realized that Taylor just wasn't as committed to the band as they would have liked him to be. So they just went separate ways. One night during the summer, Andrew and Ryan were at A&P,walking through the aisles Andrew came across an old friend, Andy Mior (he works there). They talked and talked and Andrew mentioned the band to him, he was into it but he wanted to see what we were made of first. So Andrew, Ryan , Andy and Steve jammed a few times and it clicked right away. Four songs had been written when they realized it wasn't working out. The guys would argue and things didn't progress so they decided to eliminate Steve McKenzie from their line up. After that things couldn't have been better. The fun was back, the magic was there(thanks to Ryan), and the quality of music was there as well. Now Second In Line stood as a three peice power- Pop-Punk band, and everyone was happy. There stood Second In Line, the fastest emerging band in Thunder Bay!