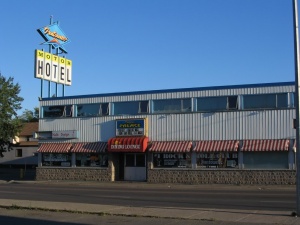 Originally a more legitimate hotel, the Inntowner was doing shows as the Uptown Motor Hotel as early as 1972.

Over the years, the following names were used:

The bar closed in 2006, following its seventh Liquor License Act conviction and a 90 day suspension.

After closing, attempts were made to obtain a new liquor license and re-open under a different name. The building was struck by a drunk driver in August of 2008, with one wall being caved in. Trouble continued with the upstairs residents, leading to a double stabbing and 2010's first homicide. Eventually, the City claimed the building for unpaid taxes, evicted the 12 permanent residents and up to 16 couch-surfers, and declared that it would be torn down by December to become a parking lot. Ironically, the parking lot is to serve the new District of Thunder Bay Social Services Administrative Board, which provided services for the residents, most of whom moved on to Shelter House. The building was finally torn down in late October / early November of 2010.