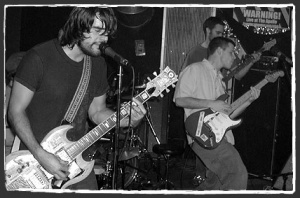 The conception of Sueisfine occured in the summer of 2000 in Thunder Bay, Ontario. Starting out as a trio of Darren Foley on guitar/vocals, Craig Delin on bass guitar, and Ray Smith on drums, Sueisfine was the offspring of three unique groups, Sic Transit Gloria, Skielaub, and Solace. Their sound was eventually expanded by Todd Williamson on guitar, Len Wallis on keyboards and Chris Roy on percussion.

Sueisfine is best described as a melodious flow of ambient guitars meshed with a solid rhythm section, and some strange sound effects to round things out. The band thrives on playing live and achieving a heightened level of intensity, or transcendence through their performances.

2005: Sueisfine have completed a 1 year recording session at Tumbler Media in Thunder Bay. Completing the recording with 6 people, all with different schedules proved trying at times but was a very rewarding task. Mastering was done in Toronto at Lacquer Channel by Noah Mintz. You all might remember Noah from the band hEAD. He also mastered BROKEN SOCIAL SCENE'S Juno award winning album You Forgot it in People, as well as their 2005 release.

Local musician, and recording artist Luke Gladu was at the helm for Sueisfine at his studio, Tumbler Media here in Thunder Bay. Anyone who is considering recording in this city should consider contacting him, he does FANTASTIC work! Sueisfine would like to thank Luke and Noah for their patience and professionalism. And don't forget to check out our music page for free mp3 downloads and streaming tracks. Thanks to everyone that has come to see us play, and for their tremendous support. Cheers!